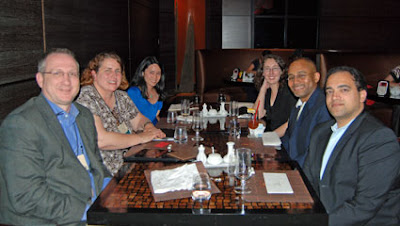 I talked at length with Regina Germain about asylum cases. Ms. Germain is the author of the leading book on asylum. I made more notes at our dinner meeting than at any other event I attended at the conference. She gave those who attended several “golden nuggets” of information on asylum law.

I talked to Brent Renison to congratulate him on his widow penalty victory in US District Court in Los Angeles.

One more thing: I got to see on of the presentations given by Jim Calloway of the Oklahoma Bar Association. Jim is a fabulous ambassador of the OBA and Oklahoma attorneys. I’m fairly critical of legal seminars but I’d say the presentation I saw was among the best three or four received at the conference.